I Love This Guy

If you happened to see this blog before today, it had  all CAPS from Fahrenheit 451 quote on down. I don't know what happened. Here we go again. 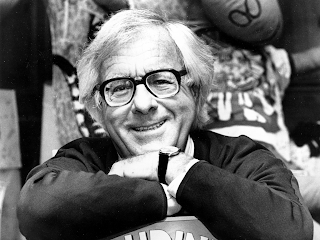 He says the reason we remember so many of his stories is because he is strong in metaphor.

“With the brass nozzle in his fists, with this great python spitting its venomous kerosene upon the world, the blood pounded in his head, and his hands were the hands of some amazing conductor playing all the symphonies of blazing and burning to bring down the tatters and charcoal ruins of history.”-- Fahrenheit 451

Wow, you’re full of them, aren’t you, Bradbury?

I’m terrible at them. It must be something in my brain that stops me from saying something is something else. But I can learn.

“If Life is a Bowl of Cherries—What am I doing in the Pits?” Bradbury is right. I remember that title (1985) when I don’t remember Erma Bombeck’s book, except that it was funny.

I remember Forrest Gump’s metaphor, “Life is a box of chocolates—you never know what you’ll get.”

But back to Bradbury. I saw today that this year, 2020, Bradbury would have celebrated his 100th birthday. Hope you’re having a good time Ray.

Whether you are a fan of his books or not, he was one of the most enthusiastic writers. He loved writing. He relished in it. He woke up in the mornings, ready to run to his typewriter. Yep, typewriter. I think he and the computer had an adversarial relationship.

“Writing is not a serious business. It’s a joy and a celebration. You should be having fun at it. Ignore the authors who say, oh my god, what work, oh Jesus Christ, you know. No, to hell with that. It is not work. If it’s work, stop it, and do something else.”

Once upon a time, I attended a writer’s seminar in San Diego, where Bradbury and about 12 students at San Diego State University sat outside on the grass while he talked of writing. (Like Socrates teaching his students.) And although I don’t’ remember what he said, I walked on air when I got out of there. (Is that a metaphor?)

Another time I attended an Optics Conference with my husband where Bradbury was the key speaker. Wow, he sat those scientists on their eats, and instead of shaking my hand, he hugged me. I figured I was blessed.

Don’t write towards a moral:

[Trying to write a cautionary story] is fatal. You must never do that. A lot of lousy novels come from people who want to do good. The do-gooder novel. The ecological novel. And if you tell me you’re doing a novel or a film about how a woodsman spares a tree, I’m not going to go see it for a minute.

Read these three things every night:

What you’ve got to do from this night forward is stuff your head with more different things from various fields . . . I’ll give you a program to follow every night, very simple program. For the next thousand nights, before you go to bed every night, read one short story. That’ll take you ten minutes, 15 minutes. Okay, then read one poem a night from the vast history of poetry. Stay away from most modern poems. It’s crap. It’s not poetry! Now if you want to kid yourself and write lines that look like poems, go ahead and do it, but you’ll go nowhere. Read the great poets, go back and read Shakespeare, read Alexander Pope, read Robert Frost. But one poem a night, one short story a night, one essay a night, for the next 1,000 nights. From various fields: archaeology, zoology, biology, all the great philosophers of time, comparing them. Read the essays of Aldous Huxley, read Lauren Eisley, great anthropologist. . . I want you to read essays in every field. On politics, analyzing literature, pick your own. But that means that every night then before you go to bed, you’re stuffing your head with one poem, one short story, one essay—at the end of a thousand nights, Jesus God, you’ll be full of stuff, won’t you?

-from “Telling the Truth,” the keynote address of The Sixth Annual Writer’s Symposium by the Sea, sponsored by Point Loma Nazarene University, 2001.

That’s quite an assignment isn’t it?

Advice from a Master.