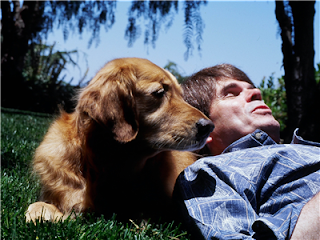 Dean Koontz and his dog Trixie--love Trixie. I have Trixie's book, Life is Good, Lessons in Joyful Living by Trixie Koontz and Dean Knootz. I can't read about her without crying.
Writing a novel is like making love, but it's also like having a tooth pulled.
Pleasure and pain.
Sometimes it's like making love while having a tooth pulled.
- Dean Koontz


How to Write a Best Selling Novel, an interview with one of the most admired and prolific bestselling author of our day, Dean Knootz:


“I started hitting best-seller lists as soon as I stopped using outlines. With Strangers, I started with nothing more than a couple of characters I thought I'd like and with a premise. Nearly every new writer I know uses detailed outlines, and so did I for a long time. But when I stopped relying on them, my work became less stiff, more organic, less predictable. BUT, nearly every beginning writer I've known and some excellent veterans as well, such as Jeffery Deaver, create chapter-by-chapter outlines of considerable length before starting to write the novel. The point of this tip is simply that if you feel constrained by an outline, it isn't the only way to work.


“If you suffer from serious self-doubt at the keyboard, as I do, that doubt doesn't have to grow into writer's block. Use the doubt, turn it into a positive. The way I've done that is to revise and polish one page--ten times, twenty times, whatever--until I am unable to make it flow more smoothly or invest it with more tension. Only then do I move on to the next page. Of course, the doubt returns page by page, but after a while, I have a stack of pages about which my doubts have been allayed, and I can move forward with increasing confidence.


“Minimalist writing, in the tradition of Hemingway, has been taught for so many decades that much of what is published these days lacks character and color. Metaphor, simile, all kinds of figures of speech have evaporated from much modern fiction, and many new writers have no interest in using the language in vivid and inventive ways. Hemingway was a stylistic genius, and his approach worked for him, in part because there were layers of meaning under the apparently simple words. Geniuses are rare; therefore, most minimalist writers end up with brisk and simple language that is barely a first layer and that has nothing under it. Dare to love the language, if minimum prose feels flat to you. Some readers won't get it; many will not only get it but delight in it.


“Writer's groups work for some new writers, not for others. I was never cut out for a writer's group. So much depends on the people in it. What are they criticizing about your work? Grammar, syntax, plot holes? Or are they criticizing your personal style, your world view and your personal philosophy? If they're criticizing the latter, it's not a good group for you, no matter what support you might think you're getting from it. Your style, your perspective, and your philosophy of life are the main things you have to sell; they are what make you different, and you shouldn't--in fact you can't--change them.


“Whether you're a man or a woman, try to marry a rich spouse. (Ha, ha!) It's good insurance for a writer. Whether you can find a rich spouse or not, never give up writing. The best-selling writers who endured fifty or a hundred rejections before finally achieving success would make for such a long list of names that I would develop carpal tunnel syndrome just typing all of them. Perseverance is as important as talent and craftsmanship.”