One Sure-fire Way to Get Smarter

Wait, I have to vent here or a lump will stay stuck in my craw.

That lump is the statement from people who say they only read non-fiction.

And there I am, a person awaiting the publication of my own non-fiction book.
Don’t get me wrong, non-fiction can carry you to heights unknown, but fiction? Fiction will carry you to the Universe and Beyond.

Fiction will teach you ways you won’t know until years later when some thought will come zinging in like one of Zeus's lightning bolts.

One aside is that many of the most respected entrepreneurs -- from Bill Gates to Elon Musk -- are voracious readers.

To select the top 100 novels, PBS polled thousands of people and asked them to name their favorite novel.

Then, PBS pulled in 13 literary professionals to cull down the list according to a few criteria. Each author got only one book for the list. Series such as  Harry Potter and Lord of the Rings counted as one book.

Books could come from anyplace in the world and any time-frame, but they had to be fiction, and written in English.
It’s fun to troll through the list and see how many you have read, how many you want to read, and how many you say, “Nope, I’ll pass on that one.”
Here's the final list of America's 100 best-loved novels:


I'm shocked that none of Ray Bradbury's books were listed. and I would think that Elizabeth Gilbert's Eat, Pray Love would beat out Fifty Shades of Gray, but what do I know, sex sells. The list was called The most favorite, not the best novels.

Some of my personal favorites are: Illusions by Richard Bach, The Color of the Wind by Carlos Ruiz Zafon (Oh, it was not written in English). Was Don Quioxite? (I do believe that was written in Spanish and translated.) The Gift from the Sea by Anne Morrow Lindbergh, The Shell Seekers by Rosamunde Pilscher, and my childhood favorite The Black Stallion by Walter Farley.


From my pen to your eyeballs. Thanks for reading,
Joyce


PS. A comment from an eighty-something lady: “I don’t read fiction because I will get so engrossed it will keep me up all night.”

PPS.
Muriel Spark on writing: “If you want to concentrate deeply on some problem, and especially on some piece of writing or paper-work, you should acquire a cat. Alone with the cat in the room where you work… the cat will invariably get up on your desk and settle under the desk lamp…And the tranquillity of the cat will gradually come to affect you sitting there at your desk. The effect of a cat on your concentration is remarkable and very mysterious.’

*From her character Mrs. Hawkins in A Far Cry from Kensington.)
Three minutes ago: 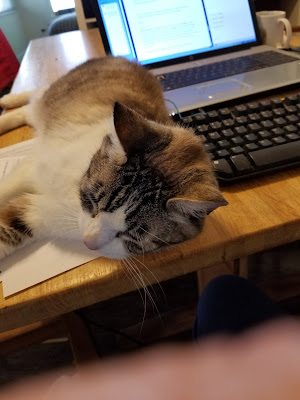 Do You Have a Home?

After Eat, Pray, Love, Elizabeth’ Gilbert’s second book bombed, she said it was alright. She went back home.

HOME to her was not her parent’s farm, nor the house she lives in; it was doing what she loves.

For her, it is writing.

Do you have a HOME?

My friend in San Diego has a studio built outside her house and a humongous kiln beside it. While potting, she’s home.

Mrs. Chiropractor in Hawaii also has a potting kiln and displays her beautiful art on the walls of her husbands business. At her house she has handmade tiles that she loves so much she doesn’t want to move, although her husband is itching for it.

Barry, the painter in Hawaii, sixty-something, lives in a school bus, rides a bike the 15 miles from Pahoa to Hilo weekly in heat, or rain, and paints beautiful Island girls and scenes. Is he HOME? I think so.

In War of Art Steven Pressfield says, first, “Nobody wants to read your shit,” (that’s a book, too, by the way), and secondly, it’s your job to do the work whether people like it, read it, or crumple it. Or worse, give it no attention.

The more you practice your art, the better you will become, and most importantly—you will be happy doing it.  Sometimes what we call tinkering is more home than that job.

It’s what you were meant to do.

Pressfield says that since nobody really wants to read your shit, it forces you to write something worth reading.

And think of the honor when someone gives their time to read/watch/listen to your job.

You might say this is well and good for creative sorts, like painters, photographers, musicians, writers, and actors, but no, creativity lives in everyone.

“HVE ENC ,”  See, even my cat. He wrote this by walking over my keyboard. Finally, he has settled down behind my computer, and not on my CAPS Lock key where he likes to sleep.

Now I can get my work done.

All along I have encouraged people to go for their dreams. Why? Why would I care?

Because my job is to do what I like to do and to encourage others to do the same.

This morning I was humming, “How Great Thou Art,” the gospel song. (I heard an Elvis Impersonator sing it recently and that set off fireworks in my brain.)

I thought of the writer of that song, of the connection with the source, the muse, the universal consciousness, God, whatever you want to call it. “Consider all the worlds thy hands have made, I see the stars, I hear the rolling thunder…” [Build to a crescendo.]

Incidentally, that song, of all the songs Elvis Presley sang, gave him his first and third Grammy. Ironically all Elvis’s Grammys were for gospel songs. (To be fair the Grammys began in 1958 when Elvis was in the military.)

Artists of old called that creative connection the muse. Some said their work was inspired. Those are the artists who know it was not they who did the work, and thus their ego stepped aside.
Van Gogh, while not financially successful in his lifetime, did come from an earnest desire to share what he saw, and to present it in his own unique way. That was his work. (And perhaps while painting, it quieted somewhat the voices that yammered inside his head.)

Someone else convinced us that Van Gogh’s paintings were worth the price they go for today.

To my friend in San Diego California--You rock!

To  Mrs. Chiropractor –keep on keeping on.

To Kathey, your granddaughter must feel the love in every stitch.

Go forth, do your work.  Have fun. Be happy,

I love you,
Joyce

P.S. Remember the accountant in the movie “You Can’t Take it With you,” who secretly made a little wind-up bunny? With encouragement, he left his job and moved into the artist’s home to make toys. 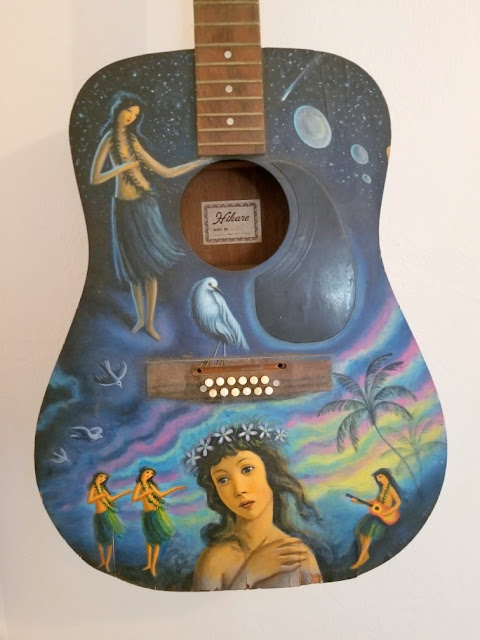 Barry's guitar
Posted by Joyce at 2:59 PM No comments: