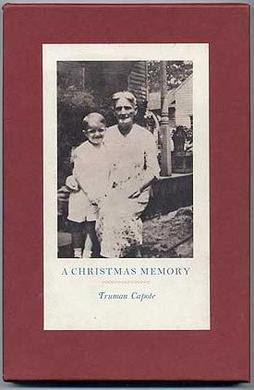 “A woman with shorn white hair is standing at the kitchen window. She is wearing tennis shoes and a shapeless gray sweater over a summery calico dress. She is small and sprightly, like a bantam hen, but due to a long youthful illness, her shoulders are pitifully hunched. Her face is remarkable—while not unlike Lincoln’s, craggy like that, and tinted by sun and wind, but it is delicate too, finely boned and her eyes are sherry-colored and timid. “Oh my,” she exclaims, her breath smoking the window pane, “it’s fruitcake weather.”

The person she is speaking is Truman Capote as a seven-year-old child.

The woman he is speaking of is sixty-something, they are cousins, and have lived together since before he can remember. Other people inhabit the house, relatives; and though they have power over the two and frequently make them cry, they are not, on the whole, too much aware of them. The boy and the old lady are each other’s best friend…

Every year I read Truman Capote’s, “A Christmas Memory,”—makes me cry though. The old lady calls Capote “Buddy” after a best friend who died as a child. The old lady is still a child.

With his exquisite manipulation of words Capote tells of taking an old dilapidated baby buggy into the woods to collect windfall pecans for the fruitcakes, and gathering together their year-long savings of $12. 73 to buy “Ha Ha’s moonshine for the cakes…whiskey, that’s the best, and the most expensive.

“Buddy,” she calls from the next room, and the next instant she is in his room holding a candle. “Well, I can’t sleep a hoot,” she declares. “My mind is jumping like a jack rabbit. Buddy, do you think Mrs. Roosevelt will serve our cake at dinner…”

Well, you just have to read the story…

Truman Capote has a natural gift that makes him a great guest at a dinner party—writes Irving Pen in Truman Capote 1965, “he is always interested in whomever he's talking to. For one thing, he really looks at the person he is with. Most of us see outlines of one another, but Truman is noting skin texture, voice tone, details of clothing.
[...]
One of the reasons that Truman is always interested in people is that he won't allow himself to be bored. He told me that when he meets a truly crashing bore he asks himself, "Why am I so bored? What is it about this person that is making me yawn?" He ponders, "What should this person do that he hasn't done? What does he lack that might intrigue me?"

He catalogues thoughtfully the bore's face, his hair style, his mannerisms, his speech patterns. He tries to imagine how the bore feels about himself, what kind of a wife he might have, what he likes and dislikes. To get the answers, he starts to ask some of these questions aloud. In short, Truman gets so absorbed in finding out why he is bored that he is no longer bored at all.