"The truth dazzles gradually, or else the world would be blind. —Emily Dickenson 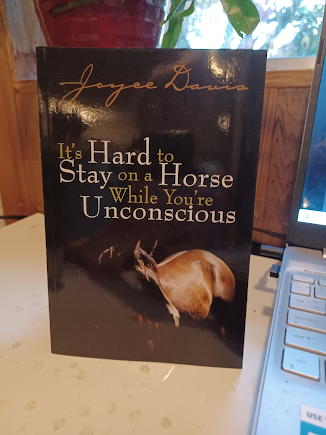 A long time ago (14 years, to be exact), I wrote a book titled It’s Hard to Stay on a Horse While You’re Unconscious and paid to have it published through Xlibris Publishing Company.

I sold a few copies and have a box of books stored at the house, but I didn’t do much regarding marketing. Shame.

Writers, don’t do that.

That’s the trouble with completing a project, then moving on to write something else. Writers want to write, not market. And many of us aren’t salespeople…, and doubt creeps in.

Don’t do that either.

I felt Xlibris was charging too much. I couldn’t sell the books for what I paid for my copies, and the title was too long. (That served me right for rebelling, for everybody says to use short titles. So, what did I do--used a long title.)

I felt, however, that the title was pertinent. I learned that unless you are focused (conscious) while sitting atop a horse, you might likely be sitting on the ground.

I also learned with a horse named Dee, who tended to go in circles, that if I focused on a spot ahead, say a fence post, she would go directly toward it.

And then there was that matter of getting knocked unconscious for a minute when Sierra, my mustang, swung her head around and hit me on the nose.

That fall was a comedy of errors. Sierra shied. I lifted my foot out of the stirrup to keep it from smashing into a tree. (Hey, I read Seabiscuit and about the jockey’s leg injury.) Sierra swung her head around, hit me in the nose, and the next thing I remember, I hit the ground, causing a hairline crack in my pelvis. The following day I had two eyes black as ripe olives.

Back to the book and the phone calls I’ve been getting: Those marketers think its subject is pertinent and that the book will sell. And they read a reasonably good review of it from Kirkus.

The book relates my experience of getting back into horses after a 40-year-hiatus without one.

I thought Boots, my childhood horse, was perfect then, and now after experiencing other horses, I know I was right. He was a perfect horse. He never hurt me, never bucked, shied, or otherwise misbehaved. He could run 24 miles an hour, bring home the cow, move at a feather touch, and bow.

So, 40 years later, for my birthday, I purchased Duchess, a remarkable 24-year-old mare, to ease me back into riding. She was an Arabian known for their endurance and longevity. She could probably out-walk any horse in the Willamette Valley. She got to be the matriarch of the herd and lived to raise the two fillies I adopted when they were 6 months old.

I write about those eight horsey years in my book. It’s Hard to Stay on a Horse While You’re Unconscious. I also included two appendices: The Horse’s Brain and the Horse’s Eye. I was driven to study them because I wanted to know why a horse needed to be trained on both sides. And when imprinting a newborn foal, if you touch one ear but not the other, later, it will behave as though he has one wild ear on an otherwise tame body. When I asked a veterinarian about the horse’s corpus callosum, the bridge between the two brain hemispheres, he wanted me to tell him.

Velvet, my quarter horse, is on the cover. At two years old, she was chocolate velvet in color. At about three years old, she transformed into a beautiful, dappled gray.

Now I am getting calls from people who want to promote the book, put it in bookstores, Fairs, and market it.

I don’t know what happened and how they got ahold of it.

How long since I opened a copy? I don’t know, but today I did.

Here is the blurb inside the dust cover:

“It’s Hard to Stay on a Horse While You’re Unconscious is a horse book, true, but it is more than that. Throughout this book is a thread of understanding that the old ways of looking at the world, our lives, how to train horses, and even looking at God do not work. We might get the job done, but not in a satisfying way, and not in a way that we are as gentle humans walking softly on the earth wish for ourselves.”

Looking Back Before Looking Ahead

or else the world would be blind.

It all started in a motion picture theater after the lights were out.

From offstage came a groan, a grinding of motors, and the curtains, once an asbestos barrier between the audience and the players, were pierced with a bolt of light from the projector. Those same curtains, transformed by the flick of a light switch, flowed docile, elegant as chiffon, into wings.

The sound of thundering hoofbeats pierced the air. A horse appeared. The audience gasped. In those days, human heroes were secondary to the horse heroes. Remember how Trigger, Roy Rogers’s golden palomino, would rear as a signature salute? Or remember how Toronado, a mighty horse, black as tires slathered with Armor All, carried an equally black-clad Zorro? There was the Lone Ranger’s horse, Silver, made snow-white for the screen with talcum powder, so I heard, and Gene Autry’s fabulous Champion, more brilliant even than Gene Autry. All came to a whistle, and all would sidle up under a rooftop so their riders could escape some dire circumstance by dropping onto their backs. They would then tear off at speed usually reserved for a racecar into unknown territory.

By the time I was nine years old, I wanted a horse more than anything.

That old desire was back. A desire to run my fingers through a horse’s velvet coat, to bury my nose in a horse’s silken mane and inhale deeply, to climb aboard and feel what the ancients called “winged.”

I considered, though, maybe I ought to know more than jump aboard and take off for tall timber. So, I began to study and write. Others might benefit from this experience, especially if they are considering getting a horse, if they like horses, or think, as Alice Walker does, that every scene is prettier with a horse in it. More importantly, they might be like me and need a few thumps on the side of the head.

For the past eight years, I have been occupied with horses, either studying in preparation for getting one or with hands-on experience.

Long ago, I sold my beloved childhood horse, Boots, and on that day, I considered the horse part of my life to be over. And then, eight years ago, Nina left the corporate world of California, bought acreage in Oregon, and decided she wanted a horse. There she was, tempting me to do the same.

After I was out of high school, working as a dental assistant, and about to be married, my dad said if I didn’t sell Boots, he would. So, I sold Boots to a cowboy who said, “Marry people, not horses.” I thought there was some truth to that statement, so I sold my horse to him, married my honey, graduated from college, had my daughters, and grieved for Boots for forty years. And then, another horse came into my life, and then another, and another. What follows is their story, and it is mine.

If you would like to read this book and tell me if you think it is viable, or can suggest a better title, pay for the shipping and I will send one for Free. (After ten copies, I will stop.) The last one I sold cost $2.48 to ship.  See why Kindle is so popular.

Go below to PayPal.