When we moved onto our farm in Hawaii I found a gem of a book among the rubble. It was Mark Twain’s book Roughing it In The Sandwich Islands. What a find. It further enamored me with the genius that was Mark Twain.

This morning upon hitting author-zone.com  #amwritingakasthomas, I found a link to Mark Twain.  Could I not follow it? Nope. I did, and found the following essay “Concerning the Interview.” 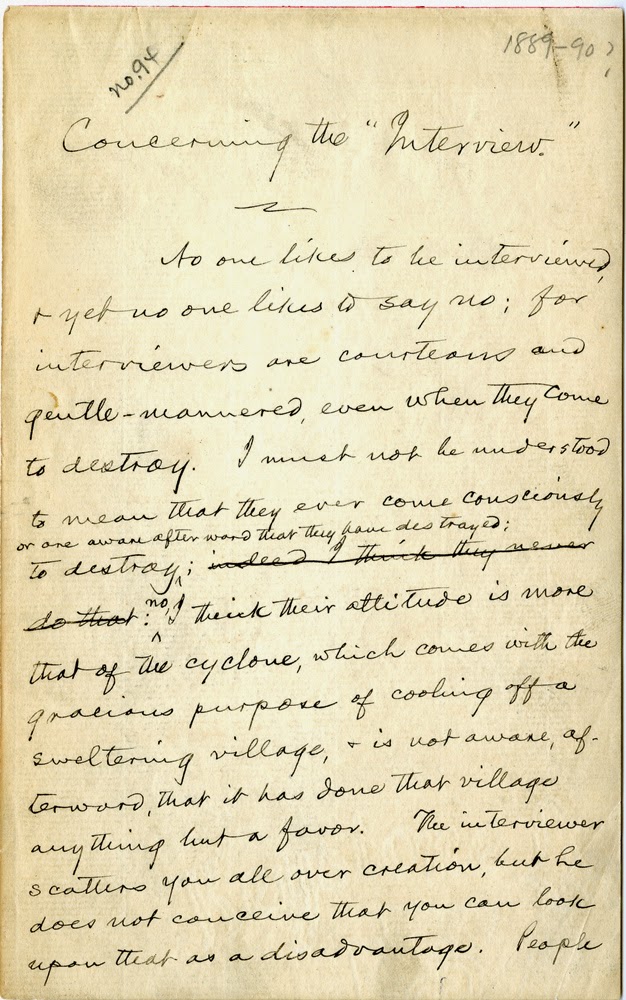 Thanks to the Mark Twain Foundation and its trustees, the PBS NewsHour brings you for the first known time in print an essay by the American literary giant on a topic dear to our hearts -- the journalistic interview. In the course of Twain's career, he was frequently interviewed by reporters. The 10-page handwritten essay has been sitting for more than 40 years in the archives of the Mark Twain Project at the University of California, Berkeley. It was written in either 1889 or 1890, a time that coincided with the rise of "yellow journalism."

“Concerning the ‘Interview.’”
No one likes to be interviewed, and yet no one likes to say no; for interviewers are courteous and gentle-mannered, even when they come to destroy. I must not be understood to mean that they ever come consciously to destroy or are aware afterward that they have destroyed; no, I think their attitude is more that of the cyclone, which comes with the gracious purpose of cooling off a sweltering village, and is not aware, afterward, that it has done that village anything but a favor. The interviewer scatters you all over creation, but he does not conceive that you can look upon that as a disadvantage. People who blame a cyclone, do it because they do not reflect that compact masses are not a cyclone’s idea of symmetry. People who find fault with the interviewer, do it because they do not reflect that he is but a cyclone, after all, though disguised in the image of God, like the rest of us; that he is not conscious of harm even when he is dusting a continent with your remains, but only thinks he is making things pleasant for you; and that therefore the just way to judge him is by his intentions, not his works.

The Interview was not a happy . It is perhaps the poorest of all ways of getting at what is in a man. In the first place, the interviewer is the reverse of an inspiration, because you are afraid of him. You know by experience that there is no choice between these disasters. No matter which he puts in, you will see at a glance that it would have been better if he had put in the other: not that the other would have been better than this, but merely that it wouldn’t have been this; and any change must be, and would be, an improvement, though in reality you know very well it wouldn’t. I may not make myself : if that is so, then I have made myself clear–a thing which could not be done except by not making myself clear, since what I am trying to show is what you feel at such a time, not what you think–for you don’t think; it is not an intellectual operation; it is only a going around in a confused circle with your head off. You only wish in a dumb way that you hadn’t done it, though really you don’t know which it is you wish you hadn’t done, and moreover you don’t care: that is not the point; you simply wish you hadn’t done it, whichever it is; done what, is a matter of minor importance and hasn’t anything to do with the case. You get at what I mean? You have felt that way? Well, that is the way one feels over his interview in print.
Yes, you are afraid of the interviewer, and that is not an inspiration. You close your shell; you put yourself on your guard; you try to be colorless; you try to be crafty, and talk all around a matter without saying anything: and when you see it in print, it makes you sick to see how well you succeeded. All the time, at every new change of question, you are alert to detect what it is the interviewer is driving at now, and circumvent him. Especially if you catch him trying to trick you into saying humorous things. And in truth that is what he is always trying to do. He shows it so plainly, works for it so openly and shamelessly, that his very first effort closes up that reservoir, and his next one caulks it tight. I do not suppose that a really humorous thing was ever said to an interviewer since the invention of his uncanny trade. Yet he must have something “characteristic;” so he invents the humorisms himself, and interlards them when he writes up his interview. They are always extravagant, often too wordy, and generally framed in “dialect”–a non-existent and impossible dialect at that. This treatment has destroyed many a humorist. But that is no merit in the interviewer, because he didn’t intend to do it.

There are plenty of reasons why the Interview is a mistake. One is, that the interviewer never seems to reflect that the wise thing to do, after he has turned on this and that and the other tap, by a multitude of questions, till he has found one that flows freely and with interest, would be to confine himself to that one, and make the best of it, and throw away the emptyings he had secured before. He doesn’t think of that. He is sure to shut off that stream with a question about some other matter; and straightway his one poor little chance of getting something worth the trouble of carrying home is gone, and gone for good. It would have been better to stick to the thing his man was interested in talking about, but you would never be able to make him understand that. He doesn’t know when you are delivering metal from when you are shoveling out slag, he can’t tell dirt from ducats; it’s all one to him, he puts in everything you say; then he sees, himself, that it is but green stuff and wasn’t worth saying, so he tries to mend it by putting in something of his own which he thinks is ripe, but in fact is rotten. True, he means well, but so does the cyclone.

Now his interruptions, his fashion of diverting you from topic to topic, have in a certain way a very serious effect: they leave you but partly uttered on each topic. Generally, you have got out just enough of your statement to damage you; you never get to the place where you meant to explain and justify your position.

Read by permission of Richard A. Watson and JPMorgan Chase Bank as trustees of the Mark Twain Foundation.

P.S. In those days long paragraphs were common. Now they say that readers don't have the patience to follow long verbiage.