From My Little Corner of The Globe

This morning I poured the last of last night's coffee over ice, loaded it with half and half, and aimed for my office in the Wayback. On the way out the door, I casually said to my husband, "When breakfast is ready, call me."

I really didn't expect him to do it, for my husband is about as lost in the kitchen as he would be if dropped on the moon. No, I take that back. He knows more about the moon. Except that a few minutes later, he appeared bearing oatmeal, cream and brown sugar. What a guy.

I read through "Money Talk," a "course" I have worked on steadily for the past two weeks. If you happen to read it, those bold lines are to emphasize them for myself.  (You see, I’m trying to get the message.)

Since I read it and did some last-minute fixes before lunch, you can see it doesn't take long. However, changing one's mindset takes longer.

I am broadcasting this information regarding my take on money. (Broadcasting, as in throwing seeds into the wind.)

Thanks for sticking with me.

If you ask your higher self what the message you

need right now, and it admonishes you—that is not your higher self.

​Your higher self is always kind, supportive, and wise.

Here is the Introduction to Money Talk.

Once upon a time, there were two monks whose order required that they do not touch a woman.

​As the two monks sauntered along a path, they came to a river where a woman was walking up and down the bank, searching for a way across. One of the monks, to the horror of the other, picked up the woman and carried her across the river.

​As the monks continued on their journey, one monk admonished the other for picking up the woman. "That wasn’t allowed," he said. "You should not have done it."

The lady-carrying monk said, “I put her down long ago. You are still carrying her.”

When I discovered that the fear of Poverty is the number on fear. And, imagine this, it stands above the fear of ill health and the fear of death.

​I thought, well, that is something we ought to put down.

​Have you ever seen a person in Poverty? Even if they are dressed in an expensive suit left over from earlier, more affluent days, they walk with their head down. Their eyes are listless, and they feel depressed, let down, not as good as others, and miserable.

Why talk about money?

“It’s not spiritual,” says one.

“It’s a hot button,” says another.

“You will alienate people."

No. we need to talk about it. This subject is on people’s minds more than any other, except maybe relationships.

​I’m not addressing the insanely rich who do insanely ridiculous things like eat endangered animals or have homes so large they can hardly visit all the rooms in one week. I’m not talking about rich people who become spoiled and egotistical—that scares us too. For we are afraid if we become rich, we will become like them.

​I’m here to tell you there are rich people you wouldn’t recognize on the street as wealthy. And those people are kind, considerate, and generous.

​While I’m not a guru, a preacher, or anyone who knows about savings, stocks, or the stock market, I do know this:

​You are a divine being with a pipeline to the source, the same as everyone else.

​Some wise author contributed this to the Christian Bible: “It is the Father’s good pleasure to give you the Kingdom.” “Ask, and you shall receive, Seek and you shall Find. Knock and it shall be opened unto you.”

​And I’m not a Bible pusher. It took me a long time to become friends with God.

​I’m not religious in the traditional sense, but I’m spiritual in the best sense. I’ve gone through the fire of doubt and non-belief and come out the other side. I will use biblical tales when it suits my purpose. (Isn’t that the reason for a parable?) And I will throw out antiquated beliefs of a vengeful God who believes in an eye for an eye and a tooth for a tooth. I once argued with a minister over the Job story, for he believed the story was true. Yet, right up front, the writer states that it is a parable, meaning a fictional story to teach a message. Blame my philosophy professor. He made me read the Bible as literature.

​Really, I take responsibility. I just talk as though someone else is to blame. Like I blame Jen Sincero (bless her heart) for starting me on this journey. I should bless my cousin, and I do, for she sent me Sincero’s book, “YOU ARE A BADA**, How to stop doubting your greatness and start living an awesome life.”

​When Jen talked of the year in Southern California when it rained non-stop for what felt like forty days and forty nights, I knew the year. We were there. My brother, driving down the I-5 freeway to visit us, said the cars stopped on the freeway because it was raining so hard the windshield wipers couldn’t handle it.

​Jen’s rain story was really about getting a new car, as she was driving a twenty-three-year-old convertible with a leaky roof, no grill, a back window that was duct-taped shut, and a front tire that went flat every three days. As she sat in Safeway’s parking lot with a trash bag under her rear, the deal was cinched. She had to have a new car.

​And she did, and that process catapulted her into a new mindset. Do you settle for what’s practical or decide to get what you want? And can you create the money to pay for it?

Her story sent me on this money-talk adventure, for I figured if I wanted to manifest money into my life, I needed to first clean up my act.

​I’m also confessing that I often wanted to chuck the whole idea of writing this course. It meant facing my fears. It made me afraid I couldn’t write it, people wouldn’t read it, and I couldn’t follow my own directives.

​ “Let’s just move to a tropical island and live frugally,” I would say. My daughter reminded me that I did that once. Ah shucks. That took away my fantasy.

​And then I would reset. The late George Russel, a famous Irish editor, and poet said,

“We are what we contemplate.”

​Contemplate the good, the uplifting. Know that The Source has your back. And here we will address the subconscious mind. It’s that little bugger that can help you or hinder you. And trying to get a handle on the subconscious is harder than catching a wet slippery fish with your bare hands—a wild fish, a big fish. And if, as people say, our subconscious mind is a recorder and that it will play back what we have put into it, we definitely need to catch it.

​Remember, many of our ideas, and the thoughts we think, are not of our own making. We are molded by the opinions of others.

​How many times have we heard that “#Money doesn’t grow on trees?” (No, but it grows from our creative ideas.)

​When we were children and wanted something, our parents, who thought they were teaching us the value of money, said, “We can’t afford it.” Or perhaps, “When you earn it, you can have it.” Or, “What do you think we are made of, money?” And then some thought the more you wanted something, the less apt you were of getting it. I can hear them, “Yeah, people in hell want ice water too.”

​Now, how screwy is that?

​Our parents were our source. Where else would we go to get what we wanted?

​Did they teach us that The Source is limited, yet it grants its bounty to a special few?

​We must remember that our parents were influenced by their parents, and those parents were taught by their parents, and so on. And all those people had the voices of the world in their ears. The Great Depression (1929-1939) sent off a wave of fear that permeated generations. People killed themselves over their loss of money, which says it was more important to them than life. That instilled such a fear that it lasted into the next generation. The thought was, be frugal, for you never know when the next crash will happen.

"There will never be another business depression if people generally realize that it is with their own fear thoughts that they literally create hard times. They think hard times, and hard times follow.”

​“So, it is with wars. When peoples of the world stop thinking depressions and wars, they will become non-existent.”

In 1932 an article appeared in The Commercial and Financial Chronicle,

“A country rich beyond all precedent in gold and jewels lies at every man’s feet. Your luck is ready at hand. All is within; nothing is without.”

…Man, individually and collectively is entitled to live in all abundance.”

​I’m back on track and ready to go the distance.

If you ask your #higher self what the message is you need right now, and it admonishes you—that is not your higher self.

​Your higher self is always kind, supportive, and wise.

​What you can expect to find within the pages of this course:

Are you with me? 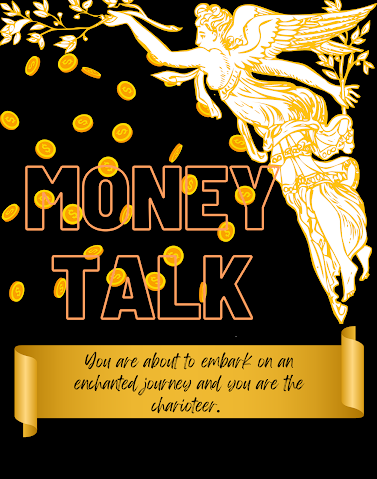