"Stay Drunk on Writing so the World Does Not Destroy You."*

The title is a Ray Bradbury quote...as well as this:

"If you know how to Read, you have a complete education."

Seventy-five years of writing for one man...isn't that awesome?!

When Ray Bradbury looked into the library he saw a whole world. There, books came alive for him. It was there he educated himself--starting at one end of the library and reading himself around it.

For us, it is the Internet.

I stumbled upon #James Scott Bell's blog, "The Night I Met Ray Bradbury," on the Internet, and it took me back to the times I devoured Bradbury's books.

You remember The Marcian Chronicles, Dandelion Wine, Something Wicked This Way Comes, Fahrenheit 451, The Illustrated Man, and others.

And I remember the two times I heard him speak.

One time was when I attended an Optics Conference with my husband. Bradbury spoke to a room full of scientists, not writers, but then who knows, I was there.

After he spoke I walked up to him, and said, “I was going to ask for an autograph, but how about a handshake instead?" 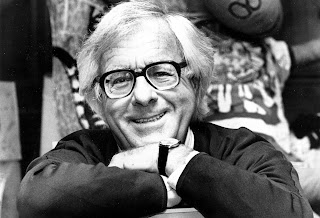 It was a little hard seeing him older on the YouTube video, but he was still the wise one.

I warn you, if you watch video you'll fall in love.

In his early years, with a wife and two young daughters, he moved to L.A, (L.A. traffic? No wonder that man never drove).

But he had no office.

He happened into the basement of the UCLA library where he heard typing. Following the sound, he came to a room filled with maybe 25 typewriters. For 10 cents per half hour, anyone could rent a typewriter.

He had found his office.

For $9.80 he wrote a small version of Fahrenheit 451, then called The Fireman.

The publisher wanted to expand The Fireman into book length so Bradbury went back to the typing room and added another 25,000 words. Also, the publisher didn't like the title, so Bradbury called the science department and asked at what temperature book paper burned.

But the Fire Department did. 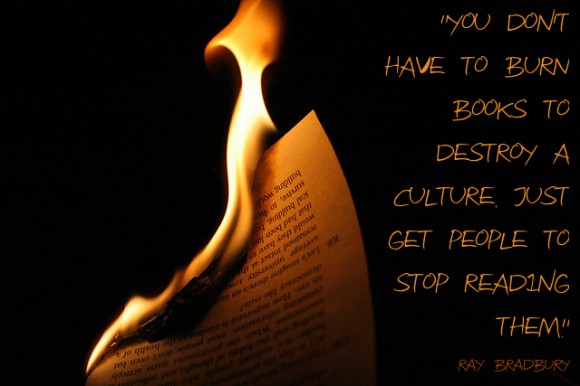 Before the hug experience, I heard Bradbury speak at a writers conference at San Diego University.  We sat outside on the grass and he talked to us, and I'm embarrassed that I haven't made more of a success with my writing, but I have followed his advice,

"Love what you do and do what you love."

"Find an author who can lead you through..." maybe that's is what is calling me...go back to two books many consider to be Bibles for writers, Bradbury's, Zen and the Art of Writing, and Steven King's, On Writing; "A Memoir of the Craft." I would put Anne Lamott's Bird by Bird on that list. It's genius.

None of my notes from that San Diego Conference exist, so I am including a Bradbury's ebullience from #James Scott Bell's blog, #Kill Zone, "The Night I Met Ray Bradbury."

·       Do word associations, as a way of letting your subconscious tell you what is inside you.

·       The intellectuals want us to believe it’s no good unless it’s tortured. The hell with that!

·       “I work for free. I haven’t made any money on any of my plays. But I love theatre. And I put up productions around town. And when I see the actors who’ve been in them on the street, we embrace, because we did what we loved and we had this experience together. For free. All the money went to my actors.”

·       He uses no outlines. He wakes up in the morning and lays in bed until his characters, his voices, compel him to “scramble to the typer” and record them before they get away.

"Do what you love. Let it out into the world. If you’re lucky, you’ll get some money. But if you don’t, do it anyway."