Let it Ride or Delete it? 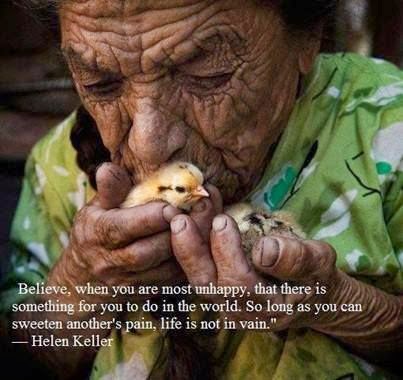 Have you ever written something, then decided it was a bunch of crap and deleted it?

I just did with this blog. I had written about will power, but I don’t want to hear about it.  “Sit up straight,” they said. “Don’t use profanities.” Crap.

Is the word crap a profanity? It isn’t abusive, vulgar, irreverent or obscene. A little dirty maybe. What about damn?

See those little chickens and that sweet old man in the above picture? I lost my two backyard hens yesterday. Both died the same day--a mystery. In trying to discover what happened to them, I read online that you should not feed potato peelings to chickens, and I thought I was giving them a treat with Thanksgiving scraps, and those scraps included potato skins. They said not to feed potato skins that had turned green, I didn’t think mine had, and I didn’t believe the chickens ate much of them, but they are both dead. My chickens were so sweet. They had a little house and free-run of the backyard. One would come up to me and sit on my lap. This morning I looked out the widow and they weren’t there. Crap.

So what does all this have to do with writing? Nothing, except I’m the writer, and I’m writing. It was my intention, in sitting down to this, to comment on a book I am reading, but I got side-tracked.  The book is Julia Child Rules, on Savoring Life by Karen Karbo. I was struck by Julia’s work ethic, her joy in savoring life, and her forty eight year long love affair with Paul Child. Don’t apologize if something falls on the floor, she said, pick it up. It is so important to have fun, to feel good and to be proud of what you have  accomplished, that you mustn’t fret if things aren’t perfect, that is part of the learning process.

Julia insisted, however, that things be done property and with attention to detail. Unlike magazine and book editors who at the time disparaged the ability of housewives to do, well, pretty much of anything. Julia had confidence that her viewers were serious and that they could master whatever she endeavored to teach them.

Julia also did not let anyone call her "Just a housewife," for she worked, cooked, researched 16 hours a day, and believed that work gave life meaning, and mastering a skill is satisfying in and of itself. "How magnificent to find one's calling at last," she said. She was thirty-eight years old.

Julia gave us the confidence to learn what she had to teach because she knew we could do it.

I know you work maybe 16 hours a day, and many days have little to show for it. You know what one writer said, "This past Saturday I wrote two paragraphs. On Sunday I took them out. All in all it was a pretty good weekend."

I have confidence in you, now go forth and write.

P.S. One last thing, like Julia, do as little housework as possible—something has to give.
Posted by Jo at 1:55 PM